"Although officially pronounced "lost at sea" after her disappearance in July 1937, famed aviatrix, Amelia Earhart, and her navigator, Fred Noonan, actually crash-landed on Endriken island in Mili Atoll, Marshall Islands. They were captured by Japanese military personnel, and were ultimately brought to Saipan, where they were imprisoned and interrogated. Fred Noonan was ultimately beheaded, and Amelia died of dysentary."

That account is known to be true by Marshallese residents, Saipan residents, researchers, American and Japanese military personnel and a growing number of followers of the Amelia legend around the world.

Watch the History Channel documentary of July 9, 2017 to discover more, then sign up for a unique WWII/Amelia Earhart tour of Saipan!

Watch the full 1.5 hour documentary below

"Enjoy the mystery. Know the truth." 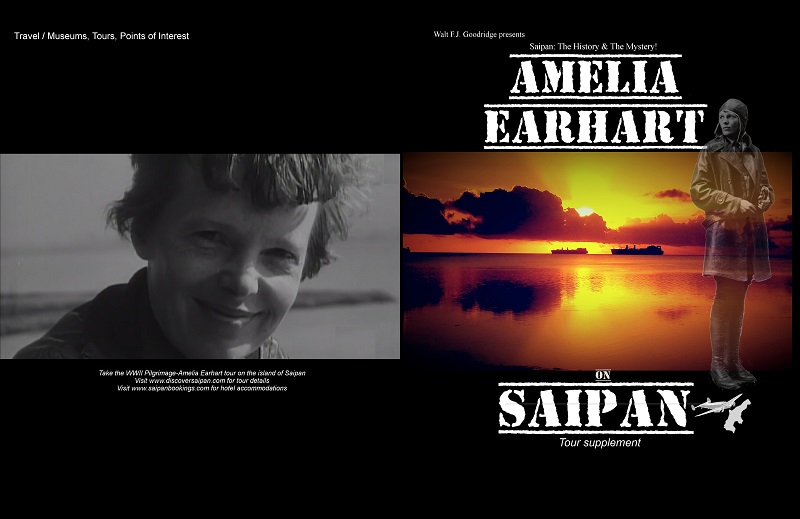 What this is: With all the renewed interest in the Saipan connection to Amelia Earhart's and Fred Noonan's fate, I've created an expanded tour guide booklet for those who've taken my WWII/Amelia tours, those who have yet to, and those who are simply fascinated by her story!

This 26- tour supplement includes
• Contemporary photos of sites on Saipan seen during your Amelia Earhart tour
• The story, as told by Marshall island and Saipan residents
• Lockheed Electra facts and trivia
• Photos of Japanese era Saipan (what Amelia saw)
• The controversial Jaluit Atoll photograph
• Facts and trivia about life on Saipan then and now
• Photo Gallery of Amelia from infancy to adulthood
• plus: the expanded version of the "Real Story" article/infographic I created for the Marianas Variety
See the Variety article here

or here via Paypal


Allow 10-14 days for delivery anywhere in the US! Don't be a Saipan denier! Order here