General Knowledge & Statistics
Statistics, demographics and more
Where on Earth is Saipan??????
Saipan is in the Western Pacific, not the South Pacific Where on Earth is Saipan?
Exact Location

Official Name
The official name of the group of islands of which Saipan is a part is The Commonwealth of the Northern Mariana Islands, or C.N.M.I., for short. This (the CNMI) is typically how residents on any of the permanently populated islands (Saipan, Tinian and Rota) refer to it, as in "....here in the CNMI..."or by individual island names, as in "I miss Rota!"
Most often, in this guide, I'll use "Saipan" to refer to the entire CNMI All the islands of the CNMI (plus Guam)
Geography
archipelago: n.- 1. a group of islands. 2. a sea or stretch of water containing many islands.
The CNMI is a fifteen-island chain of islands (an archipelago) that stretches 400 miles (north to south) along the edge of the Marianas Trench. Saipan, just 5 miles wide by 12 miles long, and is the largest and most populated of these 15 islands. Various publications refer to the CNMI as encompassing 14 islands or even 13. Typically, some of these sources do not include the submerged Zealandia Bank in their count. Others may not include Aguijan (aka "Goat island") a small island off the coast of Tinian. FYI: Managaha, a favorite tourist spot off the coast of Saipan, is also usually not included in any count
Maug gets counted as one (1) entity even though it is a collection of 3 smaller islands: North Island (Kita), East Island (Higashi) and West Island (Nishi)
As the largest, most populous of the islands, and the de-facto capital of the CNMI, Saipan is where the majority of population and center of commerce exists and thus is the focus of this guide.
SOUTHERN?? If these are the "northern" Mariana Islands, where are the "southern" islands?
ANSWER: Technically, that would be Guam, which is south of Rota.
Note: While Guam is--from a GEOLOGICAL perspective--part of the same archipelago that comprise the Mariana Islands, it is NOT part of the CNMI. It is a separate entity with its own government and relationship to the United States.
Time Zone & Area Code [toc | faq]

• The CNMI has its own time zone: Chamorro Standard Time. (ChST)

• Saipan and Guam are in the same time zone

• Saipan is 14 hours AHEAD of Eastern Daylight Savings Time; 15 hours AHEAD Eastern Standard Time. (i.e. Daylight savings time is NOT observed on Saipan)

For example when it is

Size
Saipan is about 12 miles long by 5 miles wide. It is approximately 46.5 square miles in total land area. To put that in perspective:

• Saipan is approximately the size of San Francisco. -

• Saipan is slightly larger than Hong Kong but smaller than the Wash. DC.

• and, for the record: Jamaica is 4,411 square miles=a lot bigger than Saipan!

The CNMI flag
The CNMI flag is blue, with a white, five-pointed star superimposed on a gray latte stone (the traditional foundation stone used in building) in the center, surrounded by a wreath; blue symbolizes the Pacific Ocean, the star represents the Commonwealth; the latte stone and the floral head wreath display elements of the native Chamorro culture
Local "National" Anthem

notes: Adopted 1996, the Carolinian version of the song is "Satil Matawal Pacifico;"

as a commonwealth of the United States, in addition to the local anthem, "The Star-Spangled Banner" is the official National Anthem

National Symbol
The Latte Stone. A latte stone, or simply latte (also latde), is a pillar (Chamorro language: haligi) capped by a hemispherical stone capital (tasa) with the flat side facing up. Used as building supports by the ancient Chamorro people, they are found throughout most of the Mariana Islands. In modern times, the latte stone is seen as a sign of Chamorro identity and is used in many different contexts. 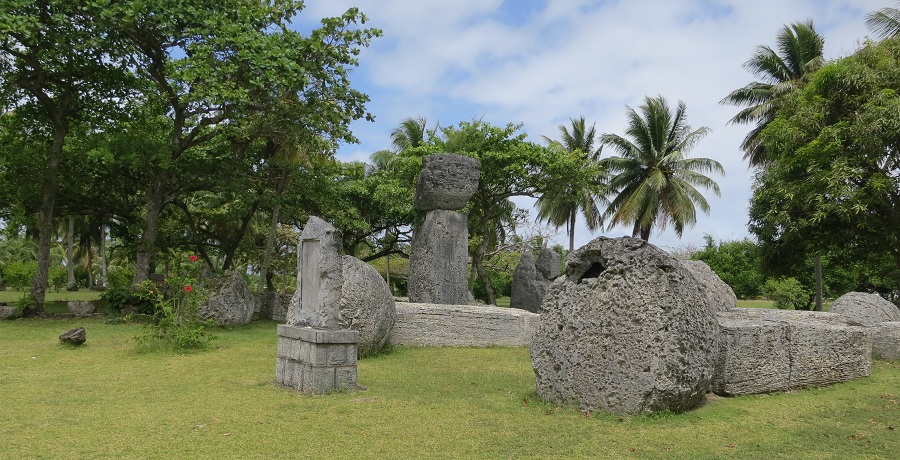 The CNMI Quarter
Designed by Richard Masters and sculpted by Phebe Hemphill, the Northern Mariana Islands quarter reverse design represents the wealth of the islands in its natural resources of land, air and sea. A large limestone Latte (an architectural structure from ancient Chamorro times) stands near the shore. A Carolinian sailing vesel is present to represent the people's excellent seafaring skills alongside an island w/coconut trees, wild plants, native birds (Chungi). A Carolinian mwar (head lei; a symbol of the virtues of honor and respect) borders the bottom of the design. It is all framed by a Teibwo (pacific basil) with the inscription, NORTHERN MARIANA ISLANDS
Voltage
Household appliances operate on 60 cycle-110/220 volts and 220/240 volts. All your appliances from the US mainland will operate here. If you intend to own a home, you'll want to purchase a generator. Those on island accommodate a range of voltages for appliances from Korea, China and other systems
CNMI Political Status [toc | faq]
Background:
After World War II, the CNMI came under US administration as part of the UN Trust Territory of the Pacific. In the 1970s, the people of the Northern Mariana Islands decided not to seek independence but instead to forge closer links with the US. Negotiations for territorial status began in 1972. A covenant to establish a commonwealth in political union with the US was approved in 1975, and came into force on 24 March 1976. A new government and constitution went into effect in 1978

• Defense is the responsibility of the US.

CNMI Government [toc | faq]
Government type
Commonwealth; self-governing with locally elected governor, lieutenant governor, and legislature
Capital
Saipan
Administrative divisions
None. There are no first-order administrative divisions as defined by the US Government, but there are four municipalities at the second order: Northern Islands, Rota, Saipan, Tinian
Constitution
Constitution of the Commonwealth of the Northern Mariana Islands effective 1 January 1978; Covenant Agreement fully effective 4 November 1986
Legal system
US system applies, except for customs, wages, certain immigration laws, and taxation
Suffrage
18 years of age; universal; indigenous inhabitants are US citizens but do not vote in US presidential elections
Executive branch

note 1. Benigno R. FITIAL was impeached by House of Representatives on 11-12 February 2013 and resigned on 20 February 2013; Eloy INOS (Republican) sworn in as governor the same day
note 2. Inos passed away in 2015 and Ralph Torres installed as Governor
Cabinet
The cabinet consists of the heads of the 10 principal departments under the executive branch who are appointed by the governor with the advice and consent of the Senate; other members include special assistants to the governor and office heads appointed by and reporting directly to the governor (For more information visit the World Leaders website ) elections: under the US Constitution, residents of unincorporated territories, such as the Commonwealth of the Northern Mariana Islands, do not vote in elections for US president and vice president; however, they may vote in the Democratic and Republican party presidential primary elections; governor and lieutenant governor elected on the same ticket by popular vote for four-year terms (eligible for a second term);
Legislative branch
Bicameral legislature consists of the Senate (9 seats; members elected by popular vote to serve four-year staggered terms) and the House of Representatives (20 seats; members elected by popular vote serve 2-year terms)
Judicial branch:
Commonwealth Supreme Court; Superior Court; Federal District Court
Mayor:
The current Mayor of Saipan is David M. Apatang, who was sworn into office on June 12, 2015. Current Acting Mayor is Antonia Tudela
Census [toc | faq]
Population [toc | faq]
The 2010 Census reveals the following changes from the previous Census (2000):

Here is an overview of the CNMI's population fluctuation from each Census year: 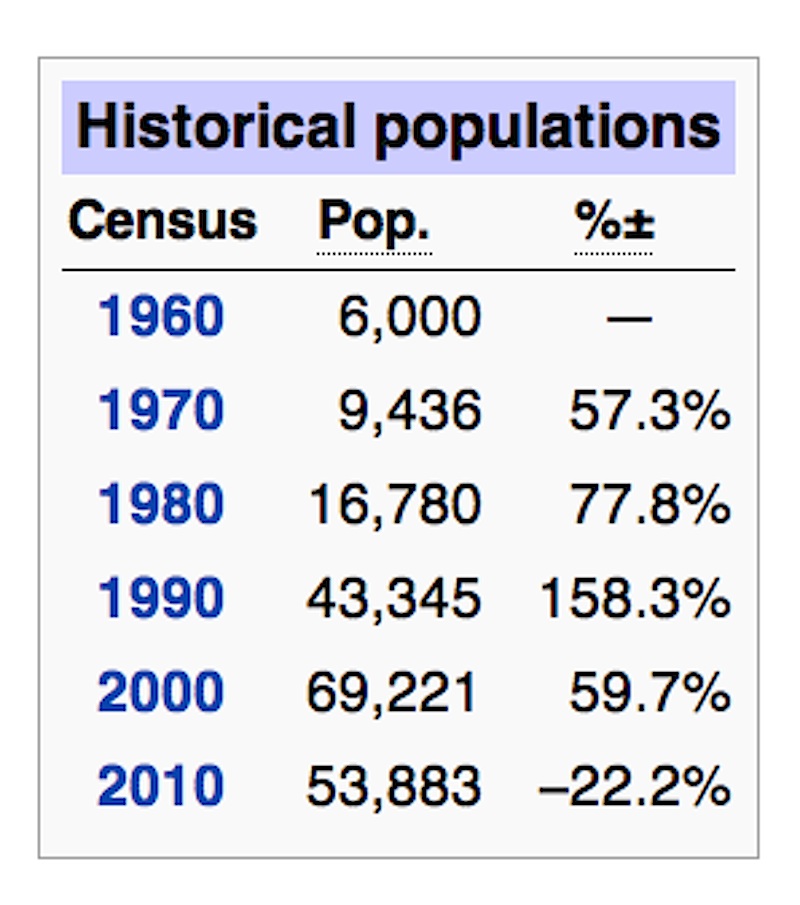 Population by district
Most of the Chuukese in the CNMI at the time of the census (1225 of 1242) were living on Saipan. A majority lived in District 1 (467) and District 3 (432).
1,128 of the 1,169 total Palauans in the CNMI in 2010 lived on Saipan, with a majority of them or 444 in District 1. As for Asian residents, Filipinos comprised 70.67% of the total Asian population in 2010 and 35.29 percent of the total CNMI population
There were 19,017 Filipinos in the CNMI in 2010, 17,285 were on Saipan; 950 on Tinian; and 782 on Rota. 5,151 or 29.80 percent of the total Filipinos on Saipan resided in District 1; 2,863 or 16.56% in District 2; 6,758 or 39.09 % in District 3; 1,047 or 6.05 % in District 4 and 1,466 or 8.48% in District 5
QUESTION: Who are the TOUWALAWOS on Saipan?
ANSWER: "Touwalawos" is just a fun word we coined here at Saipanliving.com to name a special group of people who have a distinctly different perspective and opinion of Saipan that one can only get by actually living here. It stands for "Those Of Us Who Actually Live And Work On Saipan." (It's an inside joke. No one else on Saipan will know what you're talking about!)
QUESTION: Is Saipan an overly congested country?
ANSWER:Are you kidding me??! With only 53,467 people on a piece of land that's twice the size of Manhattan island, Saipan is far from congested! There are certain elementary schools, apartment complexes and sports events stateside that have more people than there are in the entire CNMI! While there's a daily "rush hour" traffic report on one of the radio stations, anyone accustomed to a really big city rush hour will find this a drive through the park!
Languages [toc | faq]
Saipan has THREE official languages: Chamorro, Carolinian and English. English is the most widely used language. However, one of the great things about living on Saipan is your access to people and cultures from all over the world. Language-wise, Chamorro, Carolinian, Chuukese, Tagalog (Philippines), Japanese, Korean, Mandarin (China), Russian, Bengali (Bangladeshi), Sinhalese and Tamil (Sri Lanka), English, and other languages are all spoken here
Religions [toc | faq]
Christianity, Buddhism, Islam and others, I am sure.
Churches [toc | faq]
Calvary Christian, Chinese Christian, Seventh Day Adventist, Church of Christ, Church of Latter Day Saints, Ba'hai, Muslim Mosques, Jehovah Witnesses Kingdom Hall, Jesson Presbyterian, Korean Catholic Church, Korean Presbyterian, Kristo Rai Church, Marianas Baptist, Mount Carmel Cathedral, Pacific Presbyterian, Palau Evangelical, Saipan Community Church, World Mission Church.. 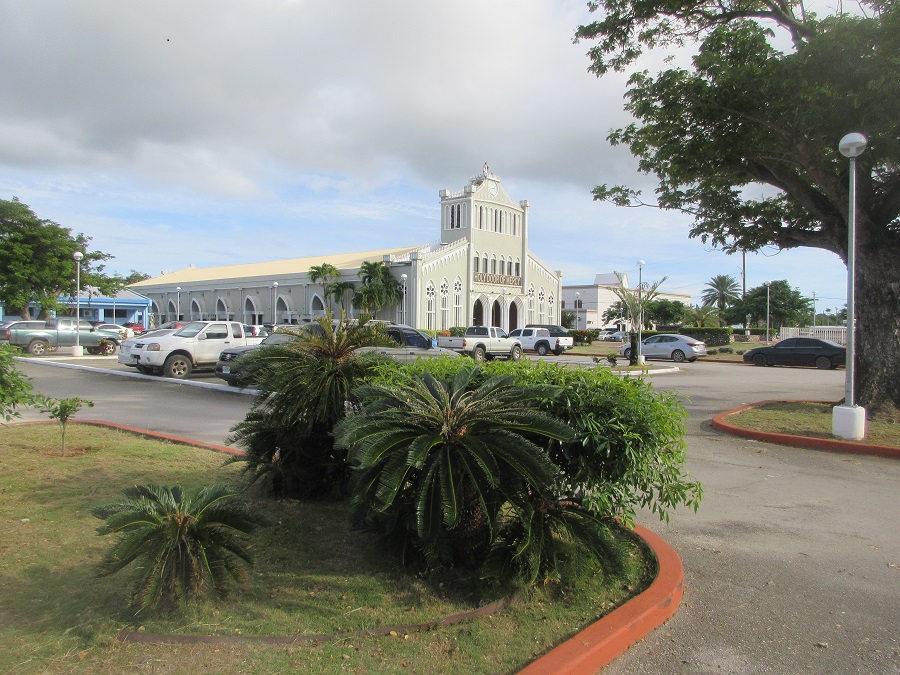 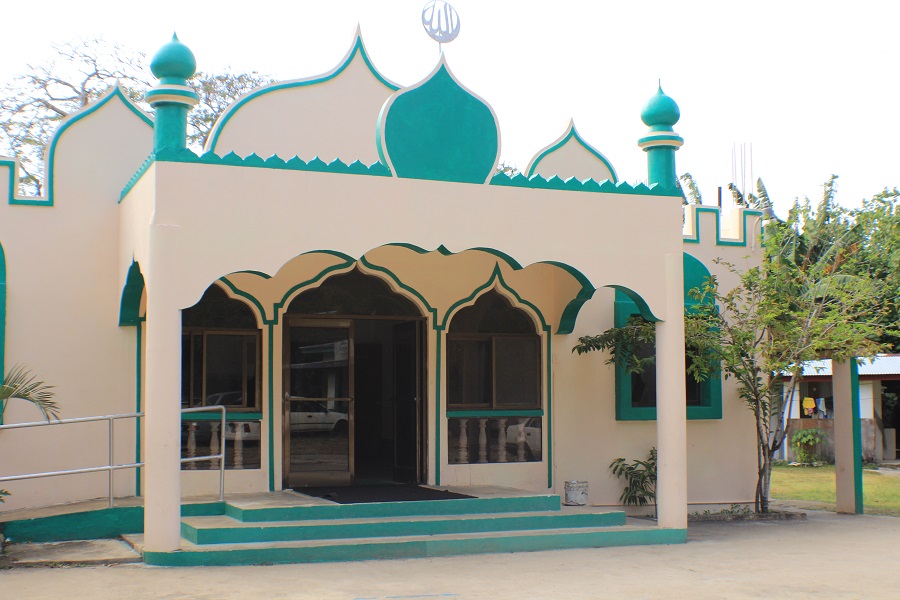 Mosque on Saipan
Indigenous Culture [toc | faq]
The Host Culture
The indigenous population--what we refer to as the "host culture"--are the Chamorro and Carolinian people. Archaeologists are discovering that some of the oldest civilizations on the planet are in this region of the world known as Micronesia. According Ancient Chamorro Society by Lawrence J. Cunningham: